15 March
The other day, +Dak Ultimak, king of CRAWL!, the best damn gaming zine on the face of everything that's ever had a face, asked a simple question:

How do you reward XP for non-combat? And if you don't use the standard (RAW) XP, pretend that you do, and how do you do it. Also remember I like things systematic.

And then later, +Erik Tenkar started asking about experience awards, which left +Edgar Johnson spouting off our joint philosophy of Risk & Rewayrd, and stating the case really well. Here's the thing: DCC awards XP based on challenges faced and overcome, not on the basis of some objective difficulty level of those encounters, but rather how hard it was for the characters who are accomplishing them. If you have an easy time of an encounter, you won't get many -- if any -- experience points; the reward here (the experience) is commensurate with the risk (how many resources were expended, how much effort used, etc.). But Dak's question directly discussed XP for non-combat activity, so where does Risk & Reward fit in there?

Other than treasure (magical and mundane), the DCC Judge has two primary reward mechanisms: the first is experience points, the second being Luck points. Yes, an argument can easily be made for story rewards or in-game RP opportunities as rewards, but I'm speaking from a mechanistic point of view here. As I see it, in the DCC Rulebook, Joseph Goodman encourages us to reward risk with experience points and behavior with Luck. But what the hell does that mean? When will I stop ending paragraphs with questions?

When Dak asks about rewarding XP for non-combat, he's not distinguishing one sort of non-combat activity from another. For situations where there's no real risk but the players act in such a way that they deserve a reward, I'll give Luck. Maybe they stick to their alignment when it would be easier to do otherwise. Maybe the gods have been appeased, the players have been particularly clever, or maybe they just made the Judge laugh hard enough that a reward is in order. Whatever it is, I usually reward Luck for things involving clever ideas, fulfilling quests and acting in character. Luck rewards often involve little to no risk on the part of the character earning them.

Experience awards, on the other hand, explicitly must involve a risk to the character. The greater the risk posed by the encounter to the characters, the more experience points I will award for it. There is no objective difficulty to these values, and everything is judged on a case-by-case basis whether we're talking in or out of combat. Non-combat encounters that I have given XP for often involve traps, tricks or enigmas that pose a credible threat to the PCs and could do some serious damage if given the chance. Do the players have to do some planning to avoid getting turned to stone by the Medusa Ray trap laid by the serpent men? Then that might be worth an experience point. It might be worth two if it actually petrifies one or more PCs but the group still gets past it.

The System -- Or, How The Hell Do I Keep This Shit Straight? 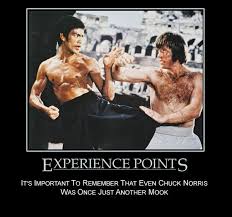 I understand Dak's problems with assigning experience in DCC. It's not an exact science and is definitely more of an art. However, like any art, there are some simple scraps of logic you can throw together to make that art easier. Here's how I do it.

Before any given session, I prep two things. The first is a regular ol' sheet of notebook paper and the other is a stack of 3x5 note cards. On the left-hand side of the notebook paper, I write the name of every PC who's participating in the night's festivities so I can (a) record specific Luck gains and (b) keep track of who's participating in each fight. If a character is off doing something else while the rest of the characters kill monsters, then they're not risking the same as the other PCs, so they aren't earning the same XP. The notecards are used in combat encounters to track initiative (and sometimes hp) and award XP, but more on that down below.

For non-combat encounters, players, as I've said above, only get XP if they're exposed to a serious risk. The dungeon's set-piece trap or trick is a great example here. The death trap that they can only escape from by clever application of wit and wisdom. The folds in space and time that threaten to trap the PCs in the same room for eternity if the correct solution isn't worked out. Things like that. If the PCs defeat such an encounter, I give them one experience points; I give them two if they do so at extreme personal cost (such as the death of at least on PC).

For combat encounters, it's pretty easy to see if an encounter is going to be a cake walk. If, by the second round of combat, no PC has been hit by an enemy in the encounter, it's probably not worth any XP. However, once the first PC takes damage, I make a tally mark on the encounter's note card, demonstrating that some amount of risk has been assumed by the PCs at this point. Tally mark number two gets made when two of the following occur: a PC takes more than half of his hp in damage, someone fails a spell casting check, someone fails a skill check, or an entire round goes by with no PC scoring damage on an enemy. The third tally mark is only made when at least one PC hits 0 hp, while tally mark #4 only occurs when the players narrow wrest victory from the jaws of defeat, usually at extreme personal cost (usually the death of no fewer than three PCs; I've given out 4 XP from a single encounter exactly once and in that encounter, exactly one PC survived). All in all, not a single XP gets awarded if the PCs aren't exposed to sufficient enough risk to provide them with a challenge.

At the end of the session, I add up all the tally marks and award that much XP to the PCs that participate in each encounter (or fraction thereof for the folks who wandered off). Luck points get a similar treatment, except most sessions don't see a single Luck point awarded (much less enough to get tallied). This method is designed to reward those players who hurl their PCs into danger rather than those who merely sit by and let their friends take the brunt of the damage. DCC may not be about heroism (as it's classically defined), but it's definitely about heroic action; that's what I want to see in my games, so that's what I reward.
DCC DCC Donnerstag