01 February
It may not seem like a terribly good idea to me, but for some reason, folks over on G+ seem to like to call me in when there's a dispute over probabilities, distributions, ranges of values, dice-based decision-making, and all the other sorts of things that I like to lump together as "dice math." It all really started here, but then +Harley Stroh started asking me questions about stuff +Erik Tenkar had written and how the math actually pans out, then other people needed help with dice math and I got involved... it was a long road to get here, but here we are, a month or so later and I still get involved in conversations with folks about dice math. Sometimes I interject of my own accord (sorry, +Edgar Johnson), sometimes other people tag me and involve me, but the long and the short of it is that I love dice math and will gladly talk about it to anyone willing to listen.

I'm not going to claim that I'm an expert on dice math. I do not have the probability distributions of tons of different dice expressions memorized for these conversations. I honestly just pull up AnyDice.com and go from there, multiplying, dividing and performing other operations as necessary. The thing is, it's fun for me to fuck around with these (relatively small) numbers from these awesome little pieces of plastic I spend so much of my life with (and so much of my money on).

If you think that even talking about dice math is going to spoil your fun, you'll want to go now and read no further. Look at pictures of kittens with things misspelled around them that make you laugh. Come back tomorrow when I talk about something fluff-related. It's crunch time.

Okay guys, here's a concept for you that I think about a lot as it pertains to dice math, and since I'm likely to talk about it just as much as I think about it, let's get you a good working definition. Central tendency is the tendency of sample values to be more frequent the closer they are to a central value. It is the tendency of the frequency these values to locate themselves centrally around a middle (median) value. One more time: it is the likelihood of the values to be grouped up around a middle value.

Are we good? Need some examples?

Now, let's look at 2d10. This dice expression has nearly the same range as 1d20 (2d10 is 2-20 rather than 1d20's 1-20) but with some noteworthy differences, the biggest of which is a peaked frequency distribution. That is, the median value (11) is actually the most likely value to be rolled (since there are more ways to roll an 11 than any other value) and each value to either side of it (greater or lesser) becomes less and less likely, the further they get from 11. See that nice picture over there? Peaked distribution, decent central tendency. But wait, there's more!

What if we roll 3d6? You know, like you do for ability scores in D&D? What's that look like?

Anyone who ever owned the 1e AD&D books should know it well. 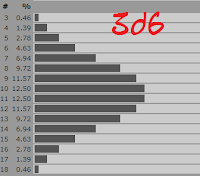 It looks like this. The old bell curve. Called a bell curve because it looks like a bell. It's not named after anyone. It also demonstrates central tendency very, very well. This distribution demonstrates a strong central tendency; the most likely results are those closer to the median (10.5) and the further a result is from the median, the less likely it is. Here's the fun thing: the more dice of the same type you add, the stronger this central tendency is due to the simple fact that there will be more ways to "build" the values at the center of the distribution than there will be to "build" the ones at the fringes.

But What Does It All Mean?

And why should you care? Consider the most common roll of 3d6 that most of us gamers use: rolling stats in D&D (or D&D-derived games). Why would we roll 3d6 rather than, say 2d10 or 1d20? It's not because the values need to be between 3 and 18 (that range was defined by the dice being rolled rather than defining what dice are being rolled). It's because that particular dice expression, 3d6, has a stronger central tendency and that you're significantly less likely to roll a character with super-low stats (or even super-high stats) than on 1d20 or even 2d10. In short, average is pretty likely and the tendency of the rolls of those 3d6 toward 10 or 11 mitigates the unlikely roll of a crap score (less than 9) or a good one (more than 12).

In short, we roll 3d6 for ability scores rather than 1d20 or 2d10 because your character is far less likely to suck (or be a superhero) if you roll 3d6.

He's more likely to be completely average, thanks to central tendency.

And that's not a bad thing. Imagine a character whose scores were generated using a d20. The scores could be all over the place. They could be high. They could be low. They could be half and half, or some other sort of fraction that I don't want to even begin to think about. You really just don't know what you're going to get.

The same holds true for the 2d10 scores. They're really random. It's only with the 3d6 that the real randomness is mitigated by a strong central tendency.

And that's why we use it for things like ability scores where we need to assure a certain level of usability or at least a tendency toward usability. Thus, central tendency is the factor that puts all of our 3d6 ability score characters on the same footing and ensures a degree of - gasp! - game balance through randomness. 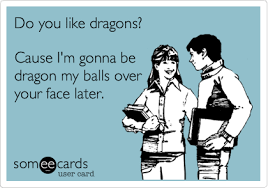 Ever notice that for success/failure rolls such as attack rolls or saving throws, we rarely roll multiple dice? Here's why: if there was a strong central tendency on a pass/fail roll, there would be a probability "hump" that would make success either very, very difficult or far too easy. Thus, we'll use a dice expression where central tendency won't completely skew the probability. How about a d20? That has a nice, flat probability curve (we still call it a curve even though it's a flat line). Yep, we'll use a d20 for attack rolls and saving throws.

If you're still reading, well done. We've just taken a journey through conceptual statistics and your head didn't blow up. Do not be afraid of the dice math. It's really not that hard.

We've also taken a journey back to the beginning of the hobby, back to when some dudes names Gary and Dave were trying to figure out how to put a game together. They wanted our characters to be playable, so they went with 3d6 for ability scores. They wanted us to have a decent chance of success (and failure) at the stuff we try to do and to be able to understand the chance we have to accomplish them so they went with 1d20 for most of those sorts of things. Hell, even "1 in 6 chance of surprise" is a flat probability roll.

There you have it. That's why we roll what we roll when we roll it. Well, most of the time. I have a few other stupid dice tricks, but they're more for DMs. Sorry players, that's all I've got for you. DMs, I'll see what sorts of dice toys I can wrench out of my noggin for you next time.
central tendency funky dice