Monster Monday: Attack of the Vermen

18 February
No man presumes to know when the first Chaos Lords set about experimenting upon the flesh of Mankind, debasing and warping it to form the first beast men. What few records remain from the days of the Elder Dominion suggest that the even before the fall of Ur-Hadad into the hands of men, the human form was being perverted by Chaos routinely and that the beast man was as much a threat then as now. Several notable Elder Race scholars even suggest that the mutability of the human form was the greatest reason for Man's enslavement; should he acquire complete control over his form and the secrets of working and wielding metal, he could easily overpower the Elder Dominion.

Despite their strong allegiance to Chaos, the Elder Races could not wipe clean from the world the stain that the beast men represented. Perhaps, some few of their number heretically mused, the Chaos magics that elven conjurers, saurial sorcerers and ophidian mathemagicians worked had worn thin the walls between this world and the domain of Chaos and that now the warp and weft of the wild space beyond had found a home in the human form and had twisted it into the myriad shapes that composed the breeds collectively known as beast men. If this hypothesis bears true, then the damage done seems irreversible, for though the spell forges and sacrificial altars of Ur-Hadad have ceased channeling dark energies to the Chaos Lords, the beast men yet spawn new breeds and new tribes, some of the most wide-spread being those known as the vermen breeds.

It would be unwise to simply categorize the vermen -- or even a single vermen tribe -- as being wholely from the descent of man and one sort of animal. While many resemble rats or mice, many also exhibit traits of opossums, raccoons, shrews, bats and other species of strange vermin sorts. Within the same tribe, the traits of many different vermin manifest themselves, sometimes alongside more drastic mutations wrought by the influence of Chaos, such that a tribe of predominantly shrew-like vermen may often possess bat wings, beaver tails and the hind legs of hares, as well as having a family or two of larger, badger-like vermen among their number. Yes, many of the vermen that Mankind comes into contact with in the sewers and ruins beneath his city seem to have a distinctly rodent-like apsect, but in the wilds outside of Man's cities and towns, more tribes seem to share descent with hares, oppossums, badgers and other species.

Not far from the Keep on Kickassistan, in the twisting warrens of perfidy and poison known as the Caves of Chaos, the Scourscum Tribe of vermen makes its lair. The tribe is predominantly composed of smallish vermen, most little more than three feet tall, and many bearing the distinct traits of rodents and mustelids. The tribes' scabbers make up the bulk of its numbers, sneaks and rogues who spread disease and discord throughout the Caves of Chaos. An elite corps of plaguewing fliers and mutant maulers keep the scabbers in line, enforcing the will Rot King Scourscum, who styles himself the demigod son of the Chaos Lord of death and disease, Ahriman. Further, Rot King Scourscum maintains good relations with the nearby 'Possumbrute, a beast man of considerable size and strength who has some familial ties to the Tribe and whom Scourscum considers a nephew; the 'Possumbrute, Hep, does not deny these claims (nor is he intelligent enough to understand them), but maintains separate lodgings to keep "mine is mine!" 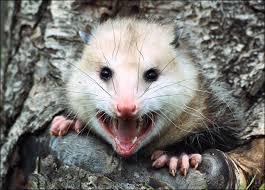 Note on Special Properties: Chaos mutations should be determined by the Judge according to his favorite method (Realms of Chaos anyone?). The Judge should also pick a disease for the tribe to carry. Note that the tribe suffers no ill effects from the disease and acts solely as carriers.

I wrestled long and hard with how to handle the goblin caves in B2 in a world with no goblins. I think "rat men" were my first or third pick, but I was on the fence about using them in Kickassistan due to the long-standing Skaven connection. Then, two things happened: (1) I uncovered the (not so) secret origin of the goat-headed beast man as the Broo of RuneQuest (and wrote about it); (2) Mr. +John Carr wrote a couple of great versions of the rat man over on Age of Ruins. Both of these things inspired me to just say "fuck it, I'll make these rat bastards my own!" And so, I have. Hats off to you, Mr. Carr, for keeping rats in the game for me!