DCC Donnerstag: Weapons of the Apocalypse

08 February
First off, it's been far too long since I've done a DCC Donnerstag article. Apparently, I let the entire month of January slide without one.

Second, I'm getting started on this late, so it'll probably technically be a DCC Freitag article, but since I've not slept yet, I'm calling it all the same. Forget hair-splittery, that won't stick here.

Third, and perhaps most importantly, there's a lot of good work going on over at the Google+ Gamma Crawl Classics community. Here, you'll find all sorts of crazy DCC enthusiasts who're hard at work on a conversion of DCC to a Gamma World-style post-apocalyptic setting.

DCC, I feel, is already post-apocalyptic. Or rather, the genre that it emulates is nearly always post-apocalyptic in one way or another. Consider the Dying Earth books or CA Smith's Zothique. Hell, try Barsoom on for size. Sometimes, the apocalypse is impending or temporary (Hyperborea) or it was a fantasy apocalypse (Hyboria), but the case remains, Appendix N is rife with apocalypses and DCC already has a strong post-apocalyptic vibe going on. After all, didn't all those civilizations who fell into ruin (you know, the ruins that you're now looting?) experience some sort of apocalypse themselves?

Thus far in the development of the world of Ur-Hadad, I've talked about three specific species, known as the Elder Races, who've all shared one apocalypse (the Rise of Man) and left a bunch of their junk lying around where pesky humans can get their hands on them. Before Mankind rose up against them, the Elves (the ancestors of those now known as the Dark Elves), the Lizardmen and the Serpentmen each had their own technologies, their own empires and their own sections of the great city of Ur-Hadad; should any human dare delve into the rubble of these fallen civilizations, they may yet find some of the forgotten tools of these deposed races... 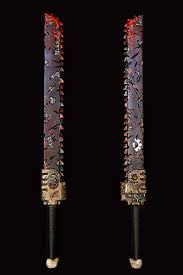 Though sages term them "saurials," common men know certain survivors of the Rise of Man as lizardfolk. Today, they hide in marshes and make their homes in once-proud ziggurats, but once, they made glorious warfare from one side of the world to another and enslaved every species they overran. When one tribe met another, brutal wars for dominance filled the lizardmen's native bayous with the dead. To exert dominance over other tribes, these lizardmen sought every advantage they could find, their scientists fueling the species's war efforts with ever more gruesome weapons. One weapon designed for fighting amongst the lizardmen tribes was the chainsword: built to shred the tough scales and thick hides of lizardmen, it proved even more effective against "softer" races and wrought massive devastation upon the bodies of the lizardmen's enemies. The chainsword is a melee weapon with a rotating series of teeth along its blade, built in the style of ancient tooth-bladed swords employed by lizardmen for millennia. These weapons were ubiquitous in the old lizardman empire, but today are rarely found in working order, their power supplies having been drained a thousand years ago. In such cases, they are treated as swords of an appropriate size. If one can be found with a power supply, however, it is much more deadly. Lizardmen being slightly larger than humans, most chainswords may be used as one- or two-handed weapons; they deal 1d12 damage when used one-handed but 1d16 when used two-handed. In either case, the wielder of a functioning chainsword fumbles on an unmodified roll of "1" or "2" (instead of the normal "1") and has his critical range increased by 1 (for example, most wielders will crit on a 19-20, whereas 1st level warriors will crit from 18-20). Whenever the chainsword is activated, the wielder must make a Luck check (roll d20 less than or equal to Luck score) or the chainsword's power cells will be drained requiring either a recharge (using some advanced and long-lost technology) or replaced (if a suitable power cell may be found); the chainsword functions as a normal sword until it is powered-up again.

Between the age when elves were first orphaned on the world and when the minions of the King of Elfland finally returned to the world, those elves who were left behind did everything they could to survive. They built a society from the ground up, using every tool at their disposal, becoming masters of their domains through sorcery and strategy; when this proved too little, and their enemies too great, the elves turned to darker influences, discovered the might of supernatural patrons, and eked every secret of mortal existence from it. As they gained mastery over their world, the elves warped and changed, became creatures of cruelty and chaos. Somewhere along this path, the elves invented the first painlances to counteract the strengths of their many rivals for dominance over the world. Horrifying weapons, painlances are long, spear-like devices of a curious black metal, surprisingly lightweight, that fire a beam of purple energy that wreaks havoc on the nervous system of anyone it hits. Before attacking with this weapon, the wielder must take one point of Luck damage, powering the device with his own will. He may then make a missile fire attack against the desired target with a +2 bonus; should he hit, the target takes 1d8 damage and must make an immediate Fortitude save (10 + the result of the d8 damage roll) or be paralyzed with pain for 1d5 rounds. Through judicious use of these weapons, the elves were able to fight back the onslaught of lizardman raiders and made a name for themselves as conquerors and slavers in their own right.

While the painlances of the elves were a devastating weapon, they were minor wonders compared to the atrocities capable by the serpentmen capable of controlling the device known as the mind detonator. Few of these terrible weapons were ever constructed, leading most modern scholars to believe that they either required such vast resources to build as to be impractical or were so difficult to control that the serpentmen felt that the fewer mind detonators built, the better. Surely, the few mind detonators ever discovered since the downfall of the Elder Races are ancient things that their discoverers have been unable to master and that, ultimately, lead to the deaths of those same discoverers. The mind detonator works on principles ill-understood by the arcanists and scientists of the human race, but seems to seek out the minds of would-be victims -- the stronger the mind, the better -- and then to flood that mind with echoes of of dimensions of thought and experience beyond Man's comprehension. Apparently, any mind reflecting upon this madness for too long goes not merely irrevocably mad, but the fevered thought patterns cause brain hemorrhages and, usually, death. Looking not unlike an iron crown, the mind detonator is a circlet of black metal (the same metal as the painlance), covered in intricate scrollwork and fine engraving, lined with eight equi-distant points jutting outward from the center, that hovers mere inches above the head of its would-be master, slowly rotating. Learning to use the mind detonator can be just as deadly to its wielder as to targets; the operator first must open his mind up to warped energies of the outer dimensions before he may direct them at any other living things. First, the wielder must make a spellcasting check, modified by his level and the higher of either his Personality or Intelligence; any result less than the user's own Will save modifier plus 10 causes an immediate backlash against the user as his mind is flooded with impossible thoughts and he takes 1d12 damage for every point of Intelligence, Personality and Luck bonus that he has (only bonuses count in this way; penalties do not detract from the dice rolled). If the user rolls a "1" on his Spellcasting check, he takes twice as many dice in damage. If the user makes his Spellcasting check, he must target the strongest mind in his line of sight and does 1d12 damage for every point of Intelligence, Personality and Luck bonus the target has (the target may make a Will save for half damage). If the user rolls a "20" on the Spellcasting check, he does twice as many dice in damage (although the victim may still roll a Will save for half damage). Any character killed by this damage (whether a target or a caster) becomes a demonstration as to why the object is called a mind detonator; their head instantly explodes in a gory storm, coating all those nearby with brain matter.

*Credit Where Credit is Due: Huge thanks go out to the Gamma Crawl Classics group in general for this one and +Vincent Quigley, +Epic Prime, +Darien Mason & +Wayne Snyder in specific. Thanks a lot, guys!
DCC DCC Donnerstag Gamma World Google+ Metal Gods of Ur-Hadad Mutant Future Ur-Hadad