What Happens At Sea? d24 Table for the Dreamtime/lands Hexcrawl 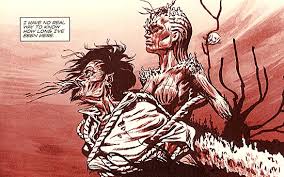 It's been awhile since my "What's My Crime" post about using the Lucky Roll in DCC to determine what crime lands a PC in the penal colony at Biology Bay in the Dreamtime/Dreamlands hexcrawl thing that I have yet to discuss too much about. It's been somewhat on the back burner as I write new material for the Game of Taps, the Weaver's Loom and the Metal Gods of Ur-Hadad campaigns, but soon one of those obligations will be lifted for a bit as +Edgar Johnson takes over. And so, it's time to turn back toward the hexcrawl thingy and see where we're going with it (aside from needing a new name for it) by switching up the "d24 Random Equipment" list into a "d24 Random Events at Sea" table that serves roughly the same purpose with the addition of simplifying the 5d12 cp for starting money roll.

This table should be self-explanatory other than the copper piece listing. Instead of rolling your random item, roll a d24 and roll for something that happened during your voyage as well as a piece of random equipment. Rather than roll the 5d12 for starting cash, you can, instead, roll a d24 and take the cp listed here.* Take as much or as little direction from this table as you like; it's mostly just a fun way to add a little bit of detail along with something useful.

*As you might expect if you've been reading this blog, these results for cp totals are based on the probability models for rolling 5d12, which provides a nice, normalized bell curve, which is then fitted to the super-flat probability curve of the d24 die roll. Instead of making it strictly make sense probabilistically, I instead tried to preserve the flavor of a bell curve, particularly with the first and last die results being significantly far away from the median (two standard deviations, if you're keeping track, putting it squarely within the 96% mark). Of course, you could just ignore it and roll normally.