This Old Module: What Would Don Turnbull Do?

15 January
A few weeks back, I wrote about Saving Old Modules From Themselves. Apparently, a lot of people were interested in what I had to say, which I take as seriously flattering. Sure, there were some people who disagreed with me and my sensibilities, but those people, quite frankly, aren't the sort of folks who spend a lot of time here in Kickassistan, so we're not worrying too much about them. The post in question brought up some of the issues that I take with older modules and what I call "genre D&D" at large and a lot of you out there had a lot of supportive things to say about the issues I brought up and, as a result, I knew I'd be following that article up with a few successive ones addressing the faults that I called out there. After trying to force some posts out of my brain, I instead decided to just wait and let them come to me. Today, I'm going to be looking at one way to solve what I call the "Not Another Orc Syndrome."

Facing room after room of orcs is boring. There, I said it. Even if those orcs are goblins or hobgoblins or any of the other billion things we've spent decades killing en masse. Sure, killing those poor mooks was new and exciting way back in the seventies (and during the 80's, too), but the shine has worn off, especially with the monsters filling these niches filling a common one between different settings and game systems. Ostensibly, if you play D&D, the One Ring, Warhammer or Barebones Fantasy, orcs is orcs is orks is orcs, right? Well, in my mind, that's a problem because once my players know they've seen a particular challenge before, it stops being scary to them because they know how to deal with it.

What's the best tool in your DM toolbox to fix this problem of genre D&D when you find it in an old school module that you'd like to run, if it weren't for all those faults?

For me, it's asking the question "What Would Don Turnbull Do?" and using the answer to that question as a guide.

For those who (somehow) don't know, Don Turnbull was the guy behind TSR UK back in the day when that entity existed. He was the guy behind Imagine magazine (lots of people are talking about that right now), he cut his teeth writing some awesome stuff for White Dwarf when that old warhorse was fresh out of the gate and was the HNIC of TSR UK overseeing the legendary UK series of modules. Most importantly to this discussion, he was the editor of the Fiend Folio, the most stunningly interesting, illustrated and imagined bestiary of rpg monsters not merely of 1e, but, for my money, to date. I get far more inspiration looking through the pages of ye olde FF than any Monster Manual or similar book ever produced.

Sure, Don Trumbull might not have written the monsters in the book, but he was behind culling them from the pages of White Dwarf and mixing them in with some module-derived monsters by some dude named Gygax into a relatively cohesive format. Now, I know that the FF has its detractors. Some folks just don't like the absolutely strange quality and absurd nature of some of the monsters therein. Also, some people like Dragonlance. Other people not liking something means zip, zero, zilch to me (as my lovely wife can attest to) because other people are the reason that crap exists. I almost always want a whacked-out, crazy monster rather than a yawn-inspiring one that my players already know how to deal with and will take one of Mr. Turnbull's monsters every time over a Monster Manual one.

Of course, your mileage will necessarily vary because you aren't me.

Here's what I want you to take away from this so far: know your aesthetic and how to get mileage out of it. 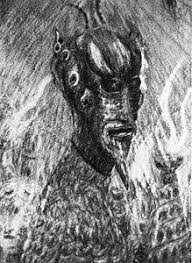 I don't always want a FF monster, just most of the time. Sometimes, I want a Lovecraft or CA Smith-style monster. I've got resources for those, and references to help me flavor my own new monsters accordingly. Sometimes, I want a more conceptual horror and I look to James Raggi for inspiration. Sometimes, I want a Priestly-style, WH-flavored grotty hellbeast. And then, of course, there are the non-gaming sources.

The core of the idea here is to use these inspirations to think about what you want to replace the Not Another Orcs with rather than just what you could replace them with. Neither is the point to just copy and paste from an author/creator you dig all of the time, but that certain author/creator's styles that inspire your aesthetic can be called upon here to help inspire your monster choices and creation. In my case, I tend to ask myself "What would Don Turnbull do if he were designing a monster for situation X that does thing Y and fits criterion Z?"

The thing about asking that question is, what you're really asking is "what the hell do I want to do?"

Which is a good thing to do.

Because you don't always know.

And asking how someone else might do X, Y and/or Z can inform you about how you actually want to do them, particularly if you don't want to do them the same way whomever would have.
Dungeon Mastering Fiend Folio LotFP This Old Module