This Is Not My Beautiful Blue Box, This Is BLUEHOLME

26 January
A few weeks ago, before the whole DnDClassics launch, I didn't have a copy of Moldvay Basic nor had I ever read one. Everything I knew about Moldvay Basic I learned from the internet and retroclones like Labyrinth Lord and LotFP Weird Fantasy. In the many collections of pdfs I've acquired over the years, I've never even found a stable version of Moldvay there, so I've had to do without that estimable tome. While I've spent the past few days poring over Moldvay Basic again and again (there's so much there!), just before the DnDClassics launch, I was spending a lot of time with a different version of Basic and a new retroclone that does a hell of a job replicating it. 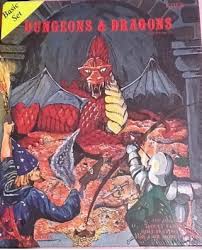 Before I go any further, let me state that I am not a reviewer. I don't get advance copies of stuff so that I might devour it quickly and crank out a review of something that I'd rather not talk about. And so, every review that I write (maybe the word "review" is wrong; "educated opinion" is more accurate) is inspired by that work in that the work actually managed to inspire me to write about it, rather than it just being something I've read to review. That having been said, let's move forward.

I really, really enjoy Holmes Basic; I didn't enjoy it at first, but I believe that that's because I didn't get Holmes Basic, and there's so much to get that might not be apparent at first. Yes, Holmes Basic is very, very basic (all weapons do d6 damage, for example), and not much like the Moldvay or Mentzer boxes that would follow it years later at all. What we have in Holmes Basic is built on the legacy of the '74 white box (and supplements) and aims to capitalize on the simplicity of it while smoothing out the strange complexities of it. Effectively, Dr. Holmes tries to take all of the rules necessary to play the first three levels of the game and put them all in one place. The words "of the game" are important here because "the game" is not AD&D (which hadn't been released yet) nor a continuing series of successive rules boxes (like BECMI), but it's OD&D. Let me say that again in a slightly different context: Holmes Basic wasn't a game in and of itself, but rather a jumping off point to lead new players into the world of the '74 white box game.

When I realized this, my brain yelled, "Hold up, Holmes just got interesting."

Since... well, since the internet, it's been very obvious that interest in OD&D has grown, including my own. The fact that a game like Swords & Wizardry exists (and I get to play it every Saturday night) is testament to this fact. I'm sure we've all read them and, while some of us will defend them to the death as the perfect iteration of the game (with our without some ideal combination of supplements and articles from The Strategic Review, Alarums & Excursions, the Dungeoneer and/or White Dwarf), the rest of us likely admire many of its features (such as its open-endedness and DIY-ness) but bemoan many of its more complex or confusing bits (such as a lack of a real combat system). The thing about Holmes is that it takes the confusion, clears it up (as best as could be done under the existing OD&D rules) while holding on to the features that players (including modern players) love about the original ruleset.

Now that I've decided that I love Dr. Holmes's edition of Basic, I have a new problem. Other than +Zach Howard of Zenopus fame, I'm not sure how many other players out there have the same love of the Doc's rules that I do. And it's not like there are new copies of it being printed, nor is it on DnDClassics, so I was kind of out of luck.

And then along came BLUEHOLME.

BLUEHOLME Prentice Rules is an amazing retroclone emulating the Holmes rules remarkably well. The presentation is clean and neat, the ruleset exceptionally clearly defined and well-organized. The art in use is all here is all public domain art, but its all thematically appropriate and so well-chosen that it easily belongs alongside commissioned artwork. Dreamscape Design and editor Michael Thomas have done a fantastic job of presenting a ruleset that closely reflects Holmes Basic but yet retains a solid feeling of uniqueness and character that feels scholarly and sophisticated, as if high-brow-ifying Holmes Basic. And why not? Why can't the scholarly effort of Dr. Holmes to clarify OD&D be celebrated in a sophisticated, erudite retroclone? The spirit of Holmes is in these pages, in print for the first time in over thirty years and suddenly, your average gamer can get their hands on them in the form of these rules with the low, low price of zero dollars. Free. Free Holmes Basic. Fucking awesome.

Not that I wouldn't pay for BLUEHOLME, just that I know that not everyone will. In fact, if Dreamscape Design ever does the Prentice Rules in POD, I will be one of the first guys in line. In fact, I'll take two. At least. You never know how many copies you'll need at the gaming table.

Reading BLUEHOLME, I got interested again in Holmes. Then Dreamscape Design released The Maze of Nuromen, their first adventure for BLUEHOLME. Just like the Prentice Rules, this one is free (though it may not always be; $0.49 isn't much to pay, though), so there's nothing to lost by downloading this. What you get in the Maze of Nuromen is a well-built and remarkably well-polished dungeon that takes itself seriously, but isn't stiff or stodgy. This seriousness doesn't cramp the "anything goes" style of early D&D and avoids the pitfalls of genre D&D by maintaining enough space for old fashioned Swords & Sorcery weirdness. Now, I'm not just interested in Holmes/BLUEHOLME, I'm excited about it. Now, I want to throw together a G+ game, perhaps as part of the "edition tour" that I proposed here.

To paraphrase OJ Simpson, if I did do it, it'd probably be every other Monday night, (off weeks from the Game of Taps, 10pm EST and onward) and would be a FLAILSNAILS-friendly event (and a great opportunity to start a new FLAILSNAILS character). So, for all you late night OSRiors, keep an eye open: some Kickassistan-style BLUEHOLME might be coming your way soon.
BLUEHOLME BX DnD Holmes Labyrinth Lord LotFP SnW