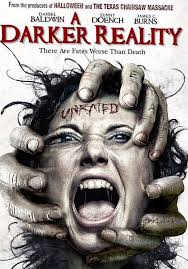 The Baldwins feature among their number this guy named Daniel -- or, as IMDB states his family calls him, Danny. Sure, he's done a
lot of different stuff, some of it even worth paying attention to (see Homicide: Life on the Streets), but I'd have to say that these days, Danny's claim to fame is that he looks like a chubby, beat-up version of his brother Alec. In 2009, Danny (or "fake Alec" as I prefer to think of him) played a serial killer in the completely abysmal film, A Darker Reality. As far as I can tell, the entire reason that this film was made was to place a guy who looks reasonably like Alec Baldwin (not hard when you're his brother) in a torture porn movie like the Saw franchise.

Do not watch this film.

And that's from the guy who explained how to watch Lifeforce and survive.

Just don't do it.

I understand that me saying "don't do something" is akin to saying to many of you "you should totally do this thing," but really, I never thought that I would have to invent the following phrase, much less use it to explain anything ever:

And if you ignore even that warning (and the fact that I can't find enough decent images from the movie to fill up space in this post), here's some of what you'll be treated to:

Now, I need to watch I Spit On Your Grave to get the bad taste of A Darker Reality out of my brain.