Why I Both Like and Dislike XP for Treasure. Also, Kielbasa.

20 December
This is not a topic going around the blogosphere or G+ right now, so I assume that most folks have already spent a lot of time talking about this and have come to some form of consensus or it has somehow been successfully ignored by bloggers. No, I don't think the latter option is very likely, either. I know that I've gotten a few people's opinions on the matter, and have spent a lot of time thinking about mine. Or rather, I think about the issue as tangential to other issues, particularly when considering one system's merits versus another's (as in, why not Swords & Wizardry rather than DCC?).

When I was growing up in the hobby, I think we missed the "you get xp for treasure you find" memo. My introduction to gaming came with the '83 Mentzer red box (bought at a garage sale, but somehow miraculously still containing all the dice and *gasp* the crayon), and though "xp for gp" was in there, I think we didn't notice it, particularly because we didn't really understand what xp were yet. And then we (somehow) moved into Palladium Fantasy and 2e at the same time, which we sort of looked at as the same game, but I think we read the xp rules from Palladium Fantasy and not 2e (Palladium Fantasy very much makes a point of not granting xp for killing monsters or gaining treasure, but if you weren't supposed to earn xp for killing things, why did everything in D&D have an xp value?). Wow, I never thought about how strange this mash up was ... Well our 2e/Palladium strangeness didn't bother tracking xp because we had managed to get ourselves sufficiently confused on the issue, so the DM (me) would just decide that people had gained levels because ... we were in fifth or sixth grade at the time and didn't know any better. (Yes, I know that there are plenty of gaming groups out there who are perfectly happy with "levels by DM fiat;" I am not one of those gamers.) Long story short, I completely missed that I should have been earning and awaring xp for treasure and that, by the time I became that "xp for gp" was a thing, I thought it was a feature of games I'd left behind (like BECMI).

One of the reasons that I dig the "xp for gp" concept is that I've rarely gotten to take advantage of it, Beyond that, it does seem to fit certain types of campaigns exceptionally well, particularly the murderhobo sort of campaign. When the players play glorified tomb raiders, it makes a lot of sense to reward them for accomplishing their chief goal: the acquisition of filthy lucre. Here we have reinforcement of greed and that's perfectly fine, following that particular campaign model. Further, campaigns with the "xp for gp" rule seem to have the possibility of ever-escalating gp awards being necessary to satisfy the players' lust for xp, but that doesn't seem like a real criticism to me (you just have to make sure that the dragon guarding all that treasure is big and bad enough and the problem is solved; if the players earn the treasure by defeating the dragon/demon/monster, no problem, if not, they're dead and it's time to reroll). Systems with "xp for gp" build that logic straight into their xp per level tables, making it a presumption of the balancing one class against any other. Thus, fighters need more gold to level than clerics or thieves, whereas magic users need more than even fighters. This all has an internal consistency that I really dig, however...

All wealth exists to make challenges easier for players in one way or another. In city environments, you can often throw money at problems. In dungeons, magic arms and armor make fighting easier. In my DCC games, you can buy more level 0s whenever you're in town. Xp, as an award, also makes things easier, so awarding "xp for gp" seems like double-dipping into the award sauce, especially since many games (including DCC) award xp based on the difficulty level of challenges overcome, meaning that easier encounters (made easier by the award of treasure) earn less xp, but if "xp for gp" is in effect, then making an encounter less difficult by "throwing treasure at the problem" doesn't actually curb the xp award (so long as there's some treasure included in the encounter). In other words, if there's a treasure to be had, throwing money at the problem of overcoming the dragon/demon/monster/old god guarding it doesn't end up reducing the amount of xp awarded for the encounter. I find something fundamentally disturbing in this logic.

All in all, I'd say that deciding to use "xp for gp" works if and when the campaign model calls for it. In my DCC game, where each treasure is special and every magic item has a name, treasure is a motivating factor, but the name of the game is facing off against mad challenges from the depths of imagination, so awarding treasure for anything that doesn't contribute to this campaign focus seems to miss the point. Similarly, in, say John's Swords & Wizardry game that I play in on Saturdays on G+, treasure is largely the point of adventuring, so awarding xp for any treasure found (actually, John awards it for treasure spent, but you get the picture) just makes sense. Right. So, "xp for gp?" It all depends. 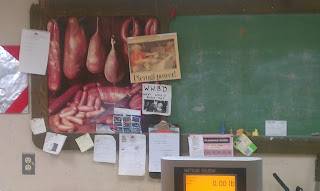 In real world news, my wife and I should be earning xp for treasure during the adventure we're heading on tomorrow. Tomorrow, we launch head first into that nightmare territory called Toledo on a journey to a little-known and out-of-the-way little place called Stanley's Market, home of the best damn kielbasa I've ever tasted. Hamtramck has nothing on Stan's. Kielbasa I ate in Poland has nothing on Stan's. Every Christmas season (and normally at least one other time each year), my wife and I make the pilgrimage to Stan's and bring back way too much of the stuff. This year, the kielbasa will be our contribution to the wife's family's Christmas party, possibly along with some pierogi or golabki, though I think we're going to experiment in making some ogorkowa (dill pickle soup) to bring, too. I know that the testimonial of some dude online you've never met isn't quite as much of an endorsement as it could be, but if you ever find yourself in Toledo, stop in at Stan's and do yourself a favor. Were a player to offer me Stan's kielbasa, that's one treasure I'd never hesitate to award xp for.
2e BECMI Dungeon Mastering Google+ Mentzer OSR Palladium Fantasy xp