A Very Kickass Christmas (The Dispatches From Kickassistan Christmas Special) 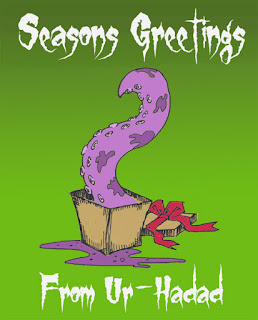 I considered adding a section to the end of all my posts this last week where I include some Christmas-themed something or other. Usually music. I decided that it'd be much easier for folks who don't particularly care to expose themselves to too much Christmassy stuff if I just crammed it all into one blog post, and thus A Very Kickass Christmas, The Dispatches From Kickassistan Christmas Special, was born!

Our first musical guests hail from a magical place and time, a mystical decade known as "the Seventies." Put your hands together for Slade, singing their 1973 classic, "Merry Xmas Everybody."

Our next guests are quite possibly my favorite band ever. and not in that hackneyed sense of the superlative. They're here to perform their fantastic Christmas ditty, "364 Days," a song about how great the rest of Santa Claus's year probably isn't. If you don't know much about the Murder City Devils, it's high time you learn.


And now to switch gears completely. Do you know how hard it is to find good Hannukah songs? Well, the closest I'm daring to come without bathing in sheer cheese is this number by Mr. Dan Kahn. Here's some footage of Mr. Kahn & the Painted Bird playing "Beyze Vintyn" (Evil Winter) in France a few years back. Dan Kahn was pretty big in the Indie Folkie scene in Michigan a while back, then he moved to Berlin and became an evangelist of klezmer.

And now for some guys who figure into rather more sessions of the Metal Gods of Ur-Hadad than I'd ever have imagined.


Oh, and a commercial break.


And more celebrities! For those who aren't aware, David Bowie is the secretly-reptilian overlord of the Stardust nebula and the democratically-elected ubermage of the third and fourth quandrants of All Time. Plus, he's apparently a singer or something. Bing Crosby gave up his position of Grand High Crypt Lord of the Impossible Black Sands of Khalabash to enlist in the US Army and fight the Nazis in World War II. He also saved a hotel with Danny Kaye in White Christmas by performing a show that the two wrote on the battlefields of that war, right before Mechahitler summoned Cthulhu. Crosby then had to punch out both Cthulhu and Mechahitler before he could settle in to smoke a congratulatory pipe upon completing the play. It's really odd that these guys didn't meet before this instance, particularly since David Bowie, the last time I checked, exists at all points in time all at once.


Who the hell remembers Twisted Sister? Sure guys, you can be on this Christmas special, too.


Oh shit, who let Lemmy in? OBJECTION: QUESTION BASED UPON FALSE ASSUMPTION. One does not "let" Lemmy do anything. Lemmy lets you not die for trying to stop him from doing anything... if you're lucky.

Let's bring it down just a notch or two and visit another one of the mad archmages of rock who keep the universe operating in order. Freddie Mercury was raised among men, but if the beings of the remote future century from which he hails could be called men, then it is only loosely. Supermen, perhaps, or, as Bowie sagely predicted, the homo superior. Released long after Queen recorded The Album With The Greatest A Side Of Any Record Possible, this is, if nothing else, both a Queen song and a Christmas one.


Ladies and gentlemen, I'd like to thank you for joining us for Kickassistan's first trip through the decades to build the most kickass Christmas we can. Our final piece of musical celebration of the season requires a little bit of necromancy, but I doubt any of you would turn up your nose at a little raising the dead (or ... raising hell?) would you? If so, I'm sure there's a perfectly tame RPG blog somewhere that you're reading rather than anything that I write. Enough of this frontin', yo, I give you motherfuckin' Christmas!