Old Dogs, New Tricks: Playing the Game I Want To

29 November
Tonight, the G+ Metal Gods of Ur-Hadad campaign was absolute blast, a sheer joy that proved to me (again) that I love to DM and I really enjoy playing with the players of that campaign, but it didn't start that way. The way I saw it (from my side of the computer screen), it started to become a crazy-great time when I  started playing the game I wanted to play and started to play it in the way I wanted to. 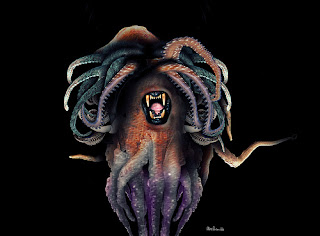 What's the game I want to play when I'm running DCC? It's a wild and crazy game of swords, sorcery and science fiction where mind-warping trans-dimensional tentacle beasts have as much a place as barbarians and horses and every wizard works magic by reshaping reality and shredding the laws of physics. It's a game where I get to use long-winded words and crooked imagery to describe brain-addling scope of the totality of cosmological truths and why that's both a good thing and a bad thing. It's a game where flocks of monkeys chase you into monstrous sundew liers-in-wait which attempt to digest you; but don't worry, you can sneak up on the monkeys and garrote their heads off and knock them out of the trees, making a snack for those sundews so you can get away.

That's my game, not some average vanilla fantasy, and tonight's session became amazing as soon as I let it.

As a result of letting the game be what I wanted it to be, I now get to create a table that determines what happens to the players when they decide its time to eat the dimensional-horror-down-a-well's severed tentacle.