05 November
So, I don't normally do the whole "Monster Monday" thing, but just a few minutes ago, I realized that I was going to need to write a few new monsters for an adventure I'm writing for the Metal Gods of Ur-Hadad gaming group on Google+ and I might as well turn them into blog fodder. That having been said, there are also a few "new" monsters (really just modifications of existing monsters) that I'm using in my Game of Taps: Keep on Kickassistan conversion. So, yeah, lots of monsters kicking around inside my brain, so it's time for some of them to blow up the old blog here. And so, ladies and gents, I give you the pygmy man ape. 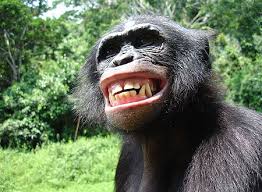 Only slightly larger than halflings, the pygmy man ape is often found as servant to other species of ape men. Sitting somewhere between a gibbon and a bonobo, but slightly higher than either on the evolutionary scale, pygmy man apes are surprisingly coordinated, particularly when working in the service of larger apes. Often, pygmy man apes will split their forces, one half trying to distract their foes while the other half sneaks behind them to attack from the rear. When making a backstab attempt, treat the pygmy man apes' clubs as saps (thus the increased damage listed above).

Pygmy man apes aren't the brightest creatures and while they have developed some tools of their own, they work far better when using tools made for them. By the same token, they make little of value but quickly latch on to items of value made by others and often hoard items that they could never make for themselves (such as art items, armor or coins). Although arboreal, these apes normally nest on the ground, preferably in caves or near defensible rock structures.

By now, you may be asking, "Alright Adam, why did we need yet another kind of ape man?" Well, folks, the thing is that the weakest ape man in the DCC RPG is a 2d8 HD white ape man and here I am designing an adventure for level 1 PCs. I needed a 1 HD version of the ape man that didn't feel forced or reskinned and so these pygmies were born.
DCC Metal Gods of Ur-Hadad monster Monster Monday