29 November
Sometimes, I don't so much forget that I love DCC, but I think about what else I could be running. Over the last day or so, a lot of the OSR community has reminded me by posting pictures of gaming shelves -- gaming shelves filled with awesome memories of great games played and the fantastic prospects of games I've never played but always wanted to (or recently decided that I wanted to in the case of more recent releases). So, the question remains, "if I wasn't running DCC, what would I be running?" 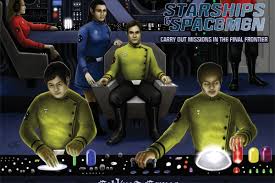 I know I've been talking about this one a lot lately over on G+ (mostly to point out the proliferation of typos and errors in the book), but I really dig this game. Over the past few years, I've gone from a distaste for Star Trek TOS to "hey, that's pretty neat" to "waitaminute, this is pretty much Twilight Zone in space, huh?" to my current love of the series. The problem that I've usually had with licensed RPGs (and with some better-established campaign settings such as Forgotten Realms and Greyhawk) is that there's so much established canon that players might know more about the setting than the DM. Sure, sure, you've always got the concept that the DM determines canon, but established canon helps inform players' expectations about the setting and, to a degree, their fun can be compromised if the DM deviates too far from it. Enter Starship& Spacemen, a pastiche of TOS (I can't remember who first used the term pastiche to describe the game) that hits all of the sweet spots of the series: crazy aliens, exploring the unexplored, exploring crazy aliens, humanist-existentialist plotlines and all that great stuff. This game out dropped a week or two ago, but I have devoured it a few times over in that span of time and I am hooked.

Here's How I'd Do It

If I wasn't running DCC right now, I'd be running Starships & Spacemen in a way that celebrates the TOS pastiche nature of the game as well as the "little guys who become big, powerful, important guys" nature of class & level RPGs. The idea that's kicking around is for a campaign I'm calling "Redshirts;" the players all take on the roles of the lowest-level officers on the ship, the guys the bridge crew take along on the missions to ostensibly help out with their special skills but that invariably end up on the receiving end of some sort of alien violence. After all, if they weren't there to be killed by aliens, why would the bridge crew need them in the first place? I'd want to take this idea in an episodic format by setting up the players with discrete adventures to go on (planets to explore) and not penalize them for death (they'd still have to reroll, but probably be able to keep xp earned), just bringing in their new officer in the next episode. To a degree, the players would be both the bridge crew and the Redshirts (who don't actually have to be redshirts... they could be science or command officers), making decisions that effect the whole crew and being the team that takes the risks that those decisions entail.

As a brief aside, I understand why there's so much resistance to episodic game formats within the OSR community since, in most forms that episodic games take, they can rob players of meaningful choices. One way I've been combating this in my Game of Taps campaign as the players explore the Keep on Kickassistan is, at the end of a session as we're wrapping up, I'll have the players make plans for the next session. They may not stick to those plans, but it lets me prepare for those plans and invent new monkeywrenches for the stuff that they said they want to do (which are often useful regardless of what they plan). In the Star Wars d6 game I'm playing on G+, I've been doing this with the other players as well, giving our brave GM plenty of time to figure out awful things to do to us.

Long story short, I'd like to frame the events of the campaign around opportunities for the players to decide what's coming next, informing that frame work with TOS's sensibilities (particularly the existentialist/humanist/Twilight Zone stuff). I really appreciate Goblinoid Games's choice to make the second edition of S&S compatible with Labyrinth Lord and Mutant Future since so much of TOS's charm is the exploration of weird places with various stages of technological advancement (and often devastating consequences of those technologies). Plus, monsters. And robots. Lots of robots.

So, if I wasn't running DCC, I'd be running S&S. Maybe now that I've written about it, I can stop thinking about it.
DCC Labyrinth Lord Mutant Future Redshirts Star Trek Starships and Spacemen