23 November
I used to be one of those guys. You know, the ones who sneer at 3d6 in order. One of the guys who thinks that 4d6 drop and rearrange should have been the law of the land. I never quite got into the idiosyncrasies of 5d6 drop/rearrange or the "re-roll 1's and 2's," but I at least recognize that some people feel they need a crutch like that to play an effective character. These days, I'm normally a 3d6 in order guy (DCC really encourages that and while it may not work as well for other OSR games, it works great for funnel PCs) or a point-buy guy (4e relies on inflated stats I'm more than prepared to admit; point-buy at least makes stat inflation relatively fair). 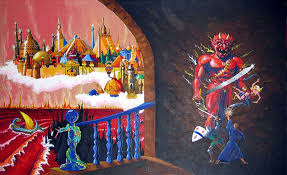 The 1e DMG states four methods of stat generation and absolutely none of them are 3d6 straight. There's 4d6 drop, 3d6 12 times (take highest), 3d6 6 times per ability score (take highest), 3d6 straight but for 12 characters (pick the character you want). Is it just me or is that a lot  of opportunity for crazy-high stats? These methods are a long way from the method mentioned in the OD&D Men & Magic book (where the DM rolls 3d6 straight for each player; the DM!) and even the Basic boxes (Holmes, Moldvay & Mentzer all call for 3d6 straight with some player-controlled modifications). So here's Uncle Gary advocating four different methods of bloating up ability scores. Well, not just here, but also in the 1e PHB: "Furthermore, it is usually essential to the character's survival to be exceptional (with a rating of 15 or above) in no fewer than two ability characteristics."

So, it shouldn't have really come as much of a surprise when I found a "holy shit" rule in Unearthed Arcana. 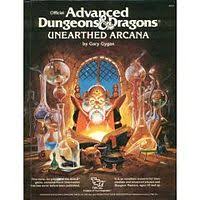 Yes, I have never owned a copy of UA until this past October. I've always wanted a copy, but never actually pulled the trigger. Being relatively unfamiliar with the volume (please note "relatively"), I never knew about the stat generation method that Uncle Gary suggests here. In case you hadn't noticed, on page 74 of UA, Uncle Gary introduces "method V" for the generation of ability scores, one that offers the player the opportunity to roll tons of dice to determine their scores, depending on their character class. The player is allowed to roll 9, 8, 7, 6, 5, 4 or 3 d6 on each stat, depending on the stats that they're supposed to need. A paladin rolls 9d6 for Charisma, for example, 8d6 for Wisdom, 7d6 for Strength and so on. I'd really like to know on what planet is the physics strange enough that 9d6 (keep highest) doesn't guarantee an 18. 8d6 seems also terribly likely to end up with 18s, as well.

I'd like to know just how many 18's a character "needed" to have from Gary's point of view to be sufficiently extraordinary?

For all of the OSR's love of Uncle Gary, it's moments like this that make me doubt just how much we rely on his actual rules for running games rather than the flair with which he ran them. The more I learn, the more I think that we love the flavor of Gygaxianism, but not the substance.
1e ability scores Gygax OSR Unearthed Arcana