01 November
Here it is, ladies and gents, the last installment of the Metal Gods for elves and wizards. Next time, I'll be looking at how warriors, thieves and dwarves can devote themselves to the path of the Metal Gods!


Chains Unbound: The Magic of Unmaking 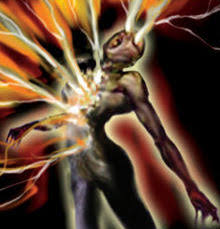 The magic of sound and fury, of flame and fog, the ways of the Unmakers are the ways most readily associated with the Metal Gods. When Men first learned magical arts at the feet of their Elder God masters, it was most commonly to survive the deplorable conditions that even the most honored of human slaves had to endure. Cleansing food from mold, rot and disease; eradicating the rats and other vermin that infested humans' dingy quarters; even removing threats posed by other slaves; these were the ends to which the first Unmakers turned their rudimentary magics. With the outbreak of rebellion against the Elder Races, the Unmakers struck very dear blows early on and thus earned their place among the heroes who would become known as the Metal Gods. In the aftermath of the rise of the Dominion of Man, the Unmakers took the Sunken City as their capitol, but given their predisposition toward the destructive end of the arcane arts, were powerless to prevent it from sinking into the swamp that surrounded it -- and now entomb it.

Wizards and elves who follow the Metal Gods and choose to emulate the actions of the Unmakers often find a natural predilection toward the destructive aspects of the arcane arts and may learn certain spells easier than others. When able to learn a new spell, he may learn one from the following list, provided he is able to spells of that level: (1) Flaming hands, (2) Shatter, (3) Fireball, (4) Control fire. The devotee may learn these spells without any chance of failure. Unlike those who learn the magic of making, Unmakers gain no additional specialized knowledge.

When patron taint is indicated for the Metal Gods, roll 1d6 on the table below. When a caster has acquired all six taints at all levels of effect, there is no need to continue rolling any more.

Well folks, there you have it. The last installment of the Metal Gods for wizards and elves for the time being. I may roll out with some patron spells down the line, but don't hold your breath. Oh, and if you missed the point of the Frampton vocoder on the voice, check out the following video.