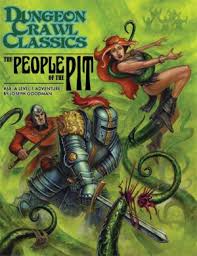 Somehow, I seem to run a week behind (or so) on my play reports for the Game of Taps campaign. So here we are again, on the eve of another session of the Game of Taps (this coming Monday), and I'm only just now getting around to writing the last session up. First things first, let's see who was here for this session:
Our story starts in the Soiled Dove of Mustertown, where the Shoveler and Meewick are catching up with Beatrice, Kothar and Thulan (who missed the expedition into the Sunken City) and introducing them to the new guys, Kishtu, Kurosagi & Zehbeh. Soldiers from the First City came looking for the adventurers on behalf of their patron who promptly sends them on a quest to escort a bevy of harem slaves from a remote monastery to the city where they will be sold off or presented as gifts to the various decadent nobles of Ur-Hadad. Offered a ridiculous reward, the adventurers simply cannot refuse but, when they get to the monastery, they find that it's been ravaged by cultists and tentacled horrors from the nearby Pit. Yep, it's time for the adventurers to investigate and face the People of the Pit!

[SPOILER ALERT] I'm going to put a break in this post so that, if you really want to read it and don't care about spoilers, follow after the break. If you don't want any spoilers for the People of the Pit, turn back now!

I did my best to remain faithful to the module as presented, but there was a pretty big sticking point early on: the ramp that curved around the edge of the Pit that allows entrance to the dungeon below is only wide enough for single-file travel. Not a problem most of the time, but it created a really big bottleneck at the front of the line where whoever was in the face of the enemy needed to be moved before another PC could attack the cultist at the front of the enemy line and no one could get around them. We worked out some clever logic to get around this, but it took some doing. But that's getting ahead of ourselves.

As the PCs descended into the Pit, they sent the thieves, Beatrice and Kurosagi out ahead of the group to scout. Sure enough, they encountered some cultists who summoned for a huge tentacle to attack the PCs. Apparently, they cultists' control over the tentacle wasn't too great and they couldn't get it to do what they wanted. In the meantime, the PCs were picking off cultists once they figured out a "hit then retreat" strategy that allowed them to cycle attackers in and out of melee range. By the time the cultists realized that the tentacle wasn't helping them out too much, they were mostly dead and didn't stand a chance.

Making their way into the dungeon proper, the PCs found a secret door behind an altar and the group single-filed again while half stayed behind to catch their breath and drink some booze (I use the "Liquid Courage" rule in my game). The Shoveler took the lead (not the brightest idea from not the brightest warrior) and ended up triggering at least one trap along the way (again, not the brightest) but just powered through it. When the party came to the "tentacle elevator" room, the guys waiting behind caught up and the party made the dubious decision to split. One half went into the big cave that blossomed off to the North whereas the other half went down the tentacle elevator.

The group that went into the cavern found themselves face-to-face with a pair of basilisks that paralyzed most of the group; it's a good thing that the Shoveler went with this group, his lucky rolls allowed him to shrug off the paralysis and bash some basilisk brain in. During this time, however, the dwarf, Zehbeh managed to fail all three petrification saves in a row and quickly turned to stone. All his treasure, arms and armor lost! But the team of the Shoveler, Kishtu and Kurosagi managed to beat down the basilisks before rushing after the group who went down the elevator.

Meewick, Thulan, Beatrice and Kothar all went down the tentacle and found their way to a secret burial chamber where they faced Stamina-damaging ghosts. I decided they were pirate ghosts because, well, "P-P-P-P-Pirate ghosts!?!?!" This combat went poorly for the group and would have been much worse if I hadn't failed to realize that they needed magic or magic weapons to hurt the ghosts. By, am I rusty or what? Halfway through the fight, I realized that the PCs shouldn't have been hurting the ghosts with longswords or the like but by then, in my mind, it was too late for a "do-over," and the ruling stood as (ignorantly) enacted. Most of the PCs took at least a little bit of Stamina damage (which was terrifying for Meewick, what with his Stamina of 6) but in the end, Meewick saved the day with lots of fire and Kothar finally remembered how to hit stuff with his axe. During the treasure-grab after the fight, Thulan found a black-bladed shortsword called Shadeslayer that, soon enough, he'll have to face in a contest of wills.

This gaming session taught me a few things:

DCC Game of Taps People of the Pit