29 October
Last week, in the session of Game of Taps described in this post, I gave you a bit of a peak inside how the world of B2: Keep on the Borderlands is a bit different when the eponymous Keep is placed in Kickassistan.  First off, we had the complete lack of kobolds. In their stead, we have the Higgabooga tribe of gila men, which, if you ask me, is a much cooler thing. The Higgabooga king and his booga brides were the session's ultimate boss fight which was really fun, really tough, and claimed the lives of many PCs and the entire Higgabooga court. This session was a blast, and got me thinking: what's going to happen next time I don't have the standard crew or have more new players without characters? And then I realized, I've got to keep the Keep on Kickassistan alive. 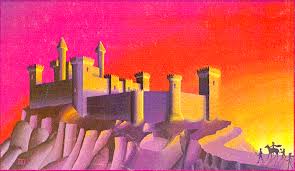 Module B2: Keep on the Borderlands is kind of perfect for a low-commitment role playing environment. Each set of caverns in the Caves of Chaos is (relatively) self-contained and represent a group of threats that a group of PCs can spend a night tearing through, get done with, go sell off their loot and spend the rest of the night carousing. Even failed forays (again, see this session's write up) can have their losses cut with enough time in a single session to go back in and make up for lost time. All in all, Keep is a pretty solid module for a group that changes its composition on a routine basis and isn't capable of the long-term commitment necessary to make it through many of the uber-long modules out there.

The first major change that I had to make was the change from kobolds to gila men, but many other changes are going to be necessary. Not only does Kickassistan not contain kobolds, but there also aren't any goblins, orcs, hobgoblins or ogres, so those guys are going to have to change. Furthermore, the whole backdrop of the D&D version of Chaos is a bit different than the DCC version of Chaos; the D&D version doesn't have nearly enough tentacles for my taste, so those undead and chaos priests are going to have to change a bit. I'm working on putting together some ideas of how each "node" of the Caves of Chaos are different, and as I see it, the work that I need to do right now involve figuring out how the following are different:


Over the next bunch of time (who knows?) I'll throw out some of the stuff that I convert from D&D to Kickassistan. Some of it I might have to save until after it's shown up in the Game of Taps, but look for all (or most of) it here.
conversion DCC Game of Taps Keep on the Borderlands