A Game of Taps: Answers to Jeff's Campaign Questions, Part 4 - The Endening

17 October
Where are the rest of Adam's answers to Jeff's campaign questions, you might ask. Here they are, Adam would say. And by Adam, I of course mean me.


How about gladiatorial arenas complete with hard-won glory and fabulous cash prizes? 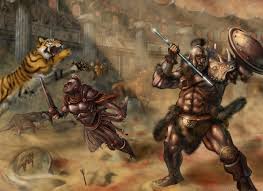 Bloodsports are common enough diversions throughout all of the known realms. From small-town brawling rings to tavern basement knife fights, men and women all around the world are desperate enough to kill each other for money. The prizes, however, are rarely fabulous nor are the victories terribly glorious. In the heart of Ur-Hadad's ancient slave market, however, the Arena of Quol has seen history's most fabled contests of martial prowess. Dating from the eras before even the rise of the Elder Races, the Arena of Quol's sands have known the blood of every race known to the men of today as well as of many races man has forgotten. Here, the Grand Vizier keeps the noble class of Ur-Hadad sated and sedated on a steady diet of blood and metal that prevents them for lusting after his own power or having many ambitions of their own aside from owning the best stable of gladiators in the city. For their part, the gladiators of Ur-Hadad are showered with adulation, coin and all that those two may bring, be they free men or fighting slaves. More than one champion of the Arena of Quol has even been an adventurer in prior life; it seems that the knowledge of one career of professional violence easily translates to another.


Are there any secret societies with sinister agendas I could join and/or fight?

Every god of Chaos has at least one cult and attendant secret society in his or her name. In addition to these demon-worshipers and blasphemers, there are secret societies dedicated to the re-ascent of the snakemen, to conspiracies of power-hungry nobles (usually masquerading behind some imaginary higher purpose like "civil liberties" or "animal rights"), to diabolic spawn of the Old Ones and to far more ridiculous causes and masters. The secret society largely seen as the most dangerous by the nobility of Ur-Hadad, primarily by the Grand Vizier and his cronies, is known as the Doctrine of Perfect Succession. The Successors, as they are known in the few circles that know of them (or sometimes the Bloody Successors, originally as in "those bloody Successors," but the "bloody" sticks due to some of their beliefs), advocate a return to the rule of a Pasha in the First City, considering the successive Grand Vizier regencies to be illegitimate and stymieing of a true return of a Pasha. A legitimate heir to the Pashate of Ur-Hadad has not surfaced not because one doesn't exist, the Bloody Successors postulate, but because the Grand Viziers have spent their regencies keeping the true heirs out of power. Now, the Bloody Successors claim, they have found an heir whose legitimacy cannot be questioned and they prepare themselves for the day when their forces and the forces of their allies will be strong enough to force the issue before the Grand Vizier's court. This threat to the Grand Vizier's power would be enough on its own to mark the Bloody Successors as dangerous, but their influence is far stranger than just a succession struggle. No, the Bloody Successors also claim to be the heirs to an ancient tradition as old as the Pashate that holds that the lineage of Pasha (his "blood") is truly a lineage of holy men and seers; thus, for them, the return to power of the Pashas means a return to a holy order. Whether a true heir to the Pashate actually still lives or not is unknown, nor is the truth behind the Bloody Successors' claims about the heritage if their religious order. More disturbingly unknown, however, is the truth of certain rumors tying the Bloody Successors to scenes of grisly murders and whispers of forbidden occult rites, all of which seem to emphasize the significance of blood.


What is there to eat around here?

Though the Soiled Dove of Mustertown serves what can only loosely be described as food, just within the city walls thousands of delicacies from every known land fill the inns, food stalls and specialty restaurants of Ur-Hadad's streets. From Skallish walrus jerky to delicious fruit chutneys from Valshadna and even stranger fare, nearly any appetite may be sated in the First City. Ever-willing to offer his opinion on any topic, particularly when inebriated, Master Guang-Yuan Jo even claims that there is one restauranteur in the entire city who knows the secrets of properly preparing the Semgane porcupine; although remarkably savory and known to gourmands throughout the world as being the pinnacle of the culinary arts and gustatory observances, the Semgane porcupine is, in its natural state, completely poisonous. Only the most superlative master of the culinary arts is capable of cooking the poison out while cooking the flavor in.


Any legendary lost treasures I could be looking for?

Treasures abound, or so rumors say, in the depths of the Sunken City. When Mankind first cast off the shackles of the Elder Races, he took up residence in those Races' cities, primarily Ur-Hadad and the city now known only as The Sunken City. Though elves, lizardmen and snakemen primarily inhabited Ur-Hadadwhile other, stranger races inhabited the Sunken City. After several centuries of life in the Sunken City, Man realized that the city was slowly sinking into the mire around it since the city no longer had the Elder Races' magic to sustain it. At first, Man did nothing to halt this decay, then used what minor magics he knew, then gave up and started to simply build upwards on top of what he had originally built. Ultimately realizing that the city's descent into the swamp was accelerating, many people began to evacuate but the evacuation somehow led to an explosive collapse in the swamp around the city before the evacuation could be completed. Thus, many treasures of the Sunken City sit precisely where they did when the City begin its descent into the swamp. Some of the greatest treasures of the realms of men now lie buried in the swamp, along with those from the Elder Races that Mankind had appropriated, including those races that modern scholars know little to nothing about. While adventurers have reclaimed a scant few of the treasures of the Sunken City, Mankind's annals record far more noteworthy baubles and objects than have ever been accounted for being liberated from the City.


Where is the nearest dragon or other monster with Type H treasure?

Dragons themselves are incredibly rare in the current age and years, if not decades go by without a single mortal man witnessing one. That having been said, those dragons who are known to mortals are given a wide berth and categorically avoided. The dread typhoon dragon, Birstremgron, is said to lair near Bastard's Rock, almost protecting the northern passage to the pirate haven; not only has Birstremgron recovered many treasures thought lost to the waves, but it is also said that Pirate King Malice Vull pays the dragon a stipend to not interfere with the rogue's activities. While the typhoon dragon may be the greatest known draconic threat to mortal realms, one dragon that is actually closest to most adventurers is Sorgul the Hidden. Deep in the heart of Ur-Hadad, in one of the vast undercities on top of which the First City is built, the Library Ful'Quan Beq was lost for generations before Mankind rose to overthrow his masters, but today is lair to Sorgul the Hidden, who spends the bulk of his time reading crumbling scrolls and mouldering papyruses or disguising himself to go out among the mortal races to procure more of the same. Possessing knowledge that most peoples believe lost ages ago, Sorgul may not be the most threatening dragon in the world, but he is likely the richest.
20 Questions DCC Game of Taps Metal Gods Metal Gods of Ur-Hadad Ur-Hadad