07 September
For this week's DCC Donnerstag, we finish up the last few bird-themed monsters from the Fiend Folio with three monsters that aren't just bird-themed, but are also humanoids. Of these three, two have made it to every successive edition of D&D, but one has been lost to time, but I'll let you judge whether that was a good idea or not. 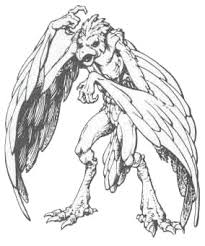 These intelligent avians haunt their high mountain eyries, caring little for the affairs of lowland humanoids. Although they wish no ill upon other species, aarakocra make no distinction between wild or domesticated animals and can sometimes be found raiding farms for livestock. Aarakocra fight solely using their talons, primarily because most of their fighting takes place in flight and their hands are part of their wings, but also because of their frail arms and strong legs.

I've always loved the aarakocra. Specifically, the Fiend Folio aarakocra. I remember an article from Dragon that allowed you to play one. Guess what I did. Anyway, I think the reason that I loved the aarakocra so much is that, back when they were new to me, the concept of bird men had always been normal men with wings (quite possibly with the head of a bird) but with the body of a man. The aarakocra were the first real avian species I'd ever encountered, as opposed to folks like the Thanagarians or whatever the hawk people from Buck Rodgers and Flash Gordon were. 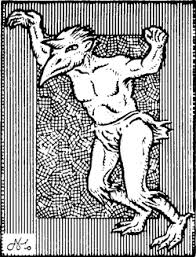 These subterranean monstrosities seem to have descended from an earlier, more highly-evolved species; eons of isolation, inbreeding or the influence of some dark god have twisted whatever the dire corbies used to be into the ravening, ferocious beasts that they are today. They have little in the way of society, and less in the way of language. The few scholars who have bothered to learn their corrupt, brutish language have translated the one word chanted over and over by the black flock in combat as "doom." Woe to the adventurer who encounters one of the lost grottoes of this base, degenerate race.

Okay, so I used to think "dire corby? wtf?" But then, preparing for this article, I actually reread the entry on them. It pretty much calls them out as reavers and marauders of the underdark. Sprinkle in some CA Smith-style mumbo-jumbo about degeneracy and you've got a usable monster. 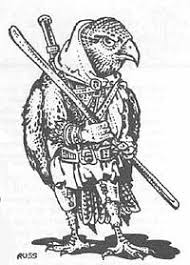 Stealthy and secretive, the avian kenku are a race of tricksters and rogues who take advantage of the better natures of other species to the best of their ability. Often underestimated due to their small stature and inability to speak (though they are suspected of telepathy by sages), kenku turn this to their advantage to steal from humans, kidnap them or encourage them into danger. Kenku fight only when retreat in not possible or when they have a clear advantage. Kenku have developed excellent disguises that allow them to pass for humans easily (until they have to speak or their faces are exposed), and they often conceal their wings (and ability to fly) with a large cloak in order to have one last ace in the hole.

As much as I like the kenku, I have, for some stupid reason, always assumed that they didn't have wings. I always assumed that the wings in Nicholson's awesome picture here were a cloak. Man, every entry I reread in the FF teaches me something new. So, maybe the reason that my kenku never flew is that they were just keeping the fact that they COULD fly a secret to play at the last second. The clever get away or whatever.

So, there you have it. As of this post, I've converted eleven monsters from the Fiend Folio to DCC stats. I'm not sure if I'll start another round of this next week or get in to some of the other stuff I'm working on for the Game of Taps, but I feel a certain pull towards an entry on crustaceans. Time will tell!
conversion DCC DCC Donnerstag Fiend Folio monster