Man has known for millennia that his is not the first people to walk the planet. His, he knows, is a young folk, even though he has seen the demise of others. So, too, have these peoples, in their inexorable decline, watched the ascension of Man; they have watched him evolve and develop, learn and discover. Of all the advances in science, arcana and culture that these other races watched Man uncover, the one that they all universally feared was the discovery of metal. With metal, Mankind could assert power of its own and a species that had only recently crawled out of its caves would learn to rival the highest of the high, the vaunted and exalted; this threat could not stand, and thus most of the ancient races struck out at Man, slew countless tribes and enslaved most of those who remained. Toiling in bondage at the forges of their masters or in secret at the forges of their dwarven allies (one of the few races who did not assault the humans), the race of Men learned that which the other races had feared and ultimately, predictably rebelled. It is the greatest irony that it was only through the slaughter and enslavement of Man that he ultimately learned the secret that the other races dreaded he learn; that it was their violence against him that led him to unravel the Riddle of Steel.

When Mankind struck back at the old races and threw off their yoke, so too did he cast off his past. No longer was he hunter-gatherer, no longer did he kill with wood and stone. Now he was a warrior, he was a conqueror, he was like the gods themselves. The old legends scrawled on the walls of caves with river-ochre were wiped away and new ones written in blood and carved into the hides of Man's enemies were made. Man's first smiths became creator-gods who gifted his race with spears, swords, shields and armor; man's first great fighters who took up these tools became warrior-gods and gifted his race with  freedom, wealth and lands of his own. Both of these became the first of the Metal Gods. 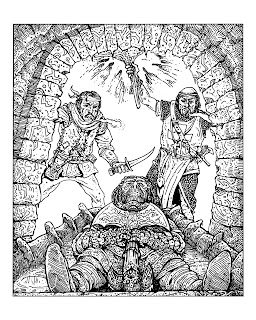 There was a time, at the dawn of Man's ascendancy when every Metal God had a name and all those were known to all Men, but as eons passed, more Men who would become Metal Gods were born to successive generations. Ages and empires would rise and fall, each with their own supreme smiths and warriors, and in time, Man lost track of the names of every Metal God, coming to worship them in their entirety as a pantheon of mostly-nameless ancestors and revered predecessors. The worship of other gods, Lawful or Chaotic, has come and gone throughout Man's history, but the Metal Gods have existed as long as Man has been free and will endure as a pantheon until twilight sets upon Man's domination of the world.

The ranks of the Metal Gods swell with the eons, filled with the names of smiths and slayers and ultimately those names pass into the forgotten past unspoken. Every warrior who wields a spear, a sword or an axe may one day become a Metal God, even if he pays no more than lip service to the pantheon; similarly, any smith capable of crafting weapons and armor notable enough to become legendary may also join the Gods' ranks. The warrior earns his place through his deeds, the smith through the deeds done with that which he has crafted, for both know the true answer to the Riddle of Steel: the power is in the hand that wields the steel, and so too does the steel lend that hand its power. As the eras have passed, so too have strictures as regards who may become Metal Gods; first, a scant few dwarves joined the pantheon, heroes of their kind and Men; later, even one or more elves joined the pantheon, usually through atonement for the sins that their forebears perpetrated upon Mankind during its slave ages. 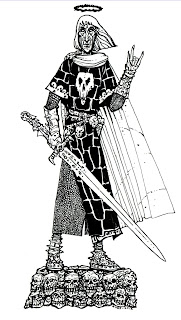 Today, the Metal Gods serve a number of important functions in modern society. First, they provide an ancestral, uniquely human object of faith. All men can find some virtue in the Metal Gods he may empathize with, no matter if he is Lawful, Neutral or Chaotic (thus, clerics of all alignments may worship them). Second, both the smiths and the swordsmen of the pantheon possess secret knowledge, of the past, of the ways of metal, of the arts of slaughter; many an aspiring student of the arcane has turned to the Metal Gods to answer their pleas for magical power and many a Metal God has listened. Finally, the Metal Gods are an aspirational group for makers and marauders alike, for any who master the ways of metal may become one of its gods.

The idea for the Metal Gods first formed in my mind as I started reading the DCC RPG for the first time. Maybe its a nostalgia trip (but I doubt it), but the art, the rules and Goodman's invocation of "pre-genre" fantasy hit a chord with me. Thing is, it was a power chord. It was a power chord with a dropped-D tuning, a Boss (or possibly SovTek) distortion pedal, played through a Marshall stack. In short, that chord was metal as hell. So, too, did this game need some serious Metal Gods. Since my concept of what my DCC world should be has more in common with CA Smith, RE Howard and HP Lovecraft (wow, lots of double initials there), I knew my Metal Gods had provide a more humanocentric view of fantasy without becoming too benevolent in an "Elder Gods vs. Old Ones," August Derleth-style schlock-fest.