23 August
Last week on DCC Donnerstag (really, the first DCC Donnerstag), I took a tip from Jeff Rients and converted some monsters from the old 1e monster book, the inestimable Fiend Folio, as per Aplus's DCC conversion guidelines. Unfortunately, I just picked the easiest three monsters I could as conversion-fodder. As an experiment, it went well I think: the three were pretty quickly and easily converted, but looked like they could hold their own in their particular niches. The downside of the article is that there really wasn't much of a challenge to formulaically converting simple monsters or any theme uniting the monsters converted. So, this week, I'd like to give you the first installment of bird-themed monsters from the FF, this time with more information about how to use them and details on conversion logic. This article assumes that the reader owns or has access to the Fiend Folio; if you don't, you have bigger problems than missing out on information that a blogger assumes you've got. EBay that thing right away.

The long legs of the achaierai are both a boon and a curse to the adventurers encountering the towering flightless birds. These legs keep the bird's vicious beak at a safe distance; an achaierai is usually too far from targets on the ground to peck at them with that flesh-rending weapon. At the same time, these legs are covered in skin tougher than the strongest plate mail and end in sharp talons. Adventurers wishing to engage the achaierai at melee range must contend with these legs, each having 15 hit points. If two of its legs are destroyed, the achaierai loses its talon attack, but instead may now target foes with its beak (the achaierai still has 2d20 action dice); further, the achaierai now moves at 20' per round. If three of its legs are destroyed, opponents may now target the achaierai's body at melee range, but the bird releases a cloud of toxic smoke that immediately deals 2d6 points of damage to all foes within ten feet (achaierai themselves are immune to this smoke) who must also make a Will save (DC 15) or go insane for 1d3 hours. While its opponents are insane, the achaierai tries to escape, dragging itself away using its remaining leg(s) and vestigial wings. It may seem that the safest way to fight an achaierai is with ranged weapons, but archers, even those behind a wall of armored compatriots, provide irresistible targets for the birds. 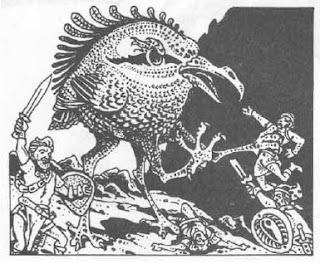 I'll be the first person to admit that the monsters from the Fiend Folio that resonate with me the most are the ones that were illustrated by Russ Nicholson. Other bloggers may have found this beast a bit goofy, but I love the strangeness here. An enemy that you have to "kill" its legs before you can kill it? Just strange enough to be awesome. When I started converting the achaierai, the important parts seemed to be the preservation of the "kill the legs first" mechanic, making the "it can't hit stuff on the ground with its beak but neither can it be hit" logic meaningful (in the conversion, there's an escalation mechanic behind it; once you've done enough damage to it, it does more damage to you) and covering the escape contingency of the toxic smoke. On the topic of the toxic smoke, I wasn't exactly sure how to cover the smoke's "insanity" effect, so I just left it blank; I changed the duration of the insanity from 3 hours to 1d3 hours because 1d3 seemed more DCC-appropriate. Since the monster has no specific Hit Dice, all numerical effects had to find some other benchmark to be based upon. Long story short, I fudged a bunch of stuff to make it all make sense.

Bloodhawks earn their name by relishing the flavor of human blood and not for their coloration (which is a drab gray). In combat, the bloodhawk dives toward its intended prey, strikes and then flies away; the predator may make its two talon attacks against any one target along its flight path. If these attacks both hit, the bloodhawk may make a third attack, this time with its beak. The bloodhawk will target humans before any other potential prey, preferring the blood of men to that of elves, dwarves or halflings.

I took a little creative license with this one. First off, a Google Image search for "blood hawk," "blood hawk fiend folio" and "blood hawk fiend folio d&d" did not bring up the illustration from the FF that I'm right now holding in my lap, so no awesome illo to go along with this one. Maybe I'll get around to scanning this image at some point. Next, the bloodhawk really wasn't too interesting of a monster. It's a bird. It flies. It claws. It... beaks? Not terribly imaginative, but we can deal with it. The beast's original three attacks were a little too simple, so I figured we could add an additional effect to them and make the beak attack contingent on hitting the same target with both talons. A "fly-by attack" mechanic was sort of a no-brainer as well. Mutant ostriches of the sandy wastes, clubneks may either attack foes with their talons or their massive, bony beaks. If the clubnek hits a single opponent with two talon attacks in the same round, the target must make a Fortitude save (DC 13) or be knocked prone. Every five rounds, the clubnek may move at a 60' sprint speed for one round. During the round that it is sprinting, the clubnek does not provoke attacks for withdrawing from combat.

I have no idea why I remember the clubnek as being an interesting monster; it isn't. Really, a mutant ostrich should be pretty cool, but this thing is really kind of boring. The coolest thing it gets is that, once every five rounds, it gets to run faster. This thing obviously needed some spicing up, so I gave it the knockdown effect and made its sprint more useful by causing it to prevent free attacks for withdrawal. There's not much of a difference between a clubnek and an axebeak, is there? Oh, here's the difference: the clubnek had the good taste to be in the Fiend Folio so it could get a killer illustration.

So, there you have it. I spent significantly more time on this week's conversions and I think it paid off. The bloodhawk and clubnek were pretty bland monsters as far as mechanics go, so I had to make them more interesting for Judges to use. There are plenty of other bird-monsters in the Fiend Folio, so this particular series of conversions has at least two more installments (although I'm not sure if they'll be the next installments of DCC Donnerstag). Until then, stay strange and have fun.
conversion DCC DCC Donnerstag Fiend Folio monster