Saving Old Modules From Themselves

27 December
If you've been following this blog for awhile, you're aware of the Keep on Kickassistan project I've been slowly working on for my Game of Taps DCC crew. The Game of Taps is the DCC campaign I run every other Monday night at the Taproom in downtown Ypsilanti, Michigan and the Keep on Kickassistan is the conversion of module B2: Keep on the Borderlands that I started running when we had some noteworthy absences from our gaming table. The Keep on Kickassistan has taken over our gaming group, primarily since it really supports the episodic "let's clear out this part of the dungeon then go back and spend our golds" mentality that playing every other week in a bar engenders.

Working on the Keep on Kickassistan has taught me a few fairly important lessons that I take with me every time I look at an old module with an eye toward how I'd run it. I spend a lot of time reading through old school modules, partially because they're the blueprint that we were given back in the day as to how to put an adventure together and partially because they give the reader a strong insight into the history of our hobby.  If you look at the difference between the maps for B1 and B2, it's a stark, night and day difference showing how much evolution the hobby experienced in just a year (1978 for B1 and 1979/80 for B2). 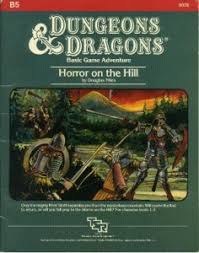 Right now, I'm reading through B5: Horror on the Hill, mostly because I recall +James Maliszewski writing about it back in November and then +James Raggi saying that he felt it was more deadly than his own modules (!!!), and am discovering that a lot of the problems that I have with prefab modules are infesting this module just like others. I was thinking about running this module at some point in the future as a FLAILSNAILS thing, so I've been looking at how to save this module from what I see as the pitfalls of blandness (by my sensibilities and aesthetics) and the tools that I'm using to save it are the same ones that I've been using for the Keep on Kickassistan.

Here's what I see as the pitfalls of what I can only call "genre D&D" (the point at which D&D stops being a game that emulates a genre and starts being a genre in and of itself).

I'm sure there are other problems that old modules have, and that there are many people who don't consider the problems that I identify here as actually being problems. I mean hey, some people actually enjoy drinking Budweiser (or rather, I assume they do), but not me. For my tastes, sensibilities and aesthetics -- as well as the expectations of my players -- these four areas need to be altered in order to "save" genre D&D modules from their genre identity and make them enjoyable again and the beer needs to be something far more tastier than Budweiser. As I start getting ready to strip down Horror on the Hill into something usable -- and continue to do the same with Keep on the Borderlands -- I'll try to let you know how I'm dealing with the specific challenges that these problems introduce into my game.